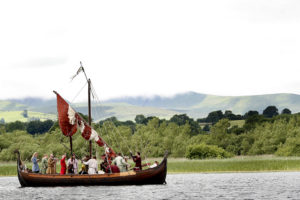 An extraordinary sight met anyone on or around Llangorse Lake as a group of marauding Vikings in full gear were sailing a thirty foot longship; flying across the water under the famous square, stripy sail.  The longship was bought up from Kent on a trailer and launched.

The Vikings were from the early mediaeval Re-enactor Group “Regia Anglorum”  (http://regia.org/) and included members from South Wales.  The re-enactment group were invited by Dr Adrian Humpage and Garnet Davies -members of the local community group Discover Llangorse and Bwlch- as part of their ongoing plans to celebrate the history of the Crannog on Llangorse Lake.  The Crannog, a man-made, medieval, island fortress, was attacked in AD916 by an army of Mercians.

The Vikings launched an attack on the Crannog in celebration of the original attack 1,100 years ago, but the modern day group proved a polite bunch, returning each others arrows, lending each other shields and posing for photos with the bemused but excited onlookers.

Watch out for a return visit later this year.